Looking Back at the 2022 Legislative Session

After a long 167 days, the 55th Arizona Legislature reached Sine Day on June 27, 2022. As the sixth longest legislative session on record, we saw unprecedented and massive attacks on abortion rights, LGBTQ rights, voting rights, and on our democracy. This was our busiest session to date, filled with big victories and disappointing losses. But first, let’s look at some numbers:

Fueled by conspiracies and misinformation about the 2020 election, anti-Democracy politicians introduced over 100 bills seeking to limit or restrict access to in-person voting, mail-in voting, early voting, voter registration and ballot initiatives. With the help of partner organizations, advocates, and volunteers, the ACLU of Arizona was able to defeat many of the worst bills. Among the bills we were able to defeat were HB 2170, which would have required onerous and unconstitutional procedures for organizations attempting to register voters, and SB 1475 which would have granted the Attorney General unprecedented powers to interfere with our elections and the will of the voters.

However, despite our efforts, many bills that harm and threaten voting rights were passed. HB 2492 enacts burdensome proof of residency and citizenship requirements to register to vote. These types of requirements have previously been found unconstitutional by federal courts. 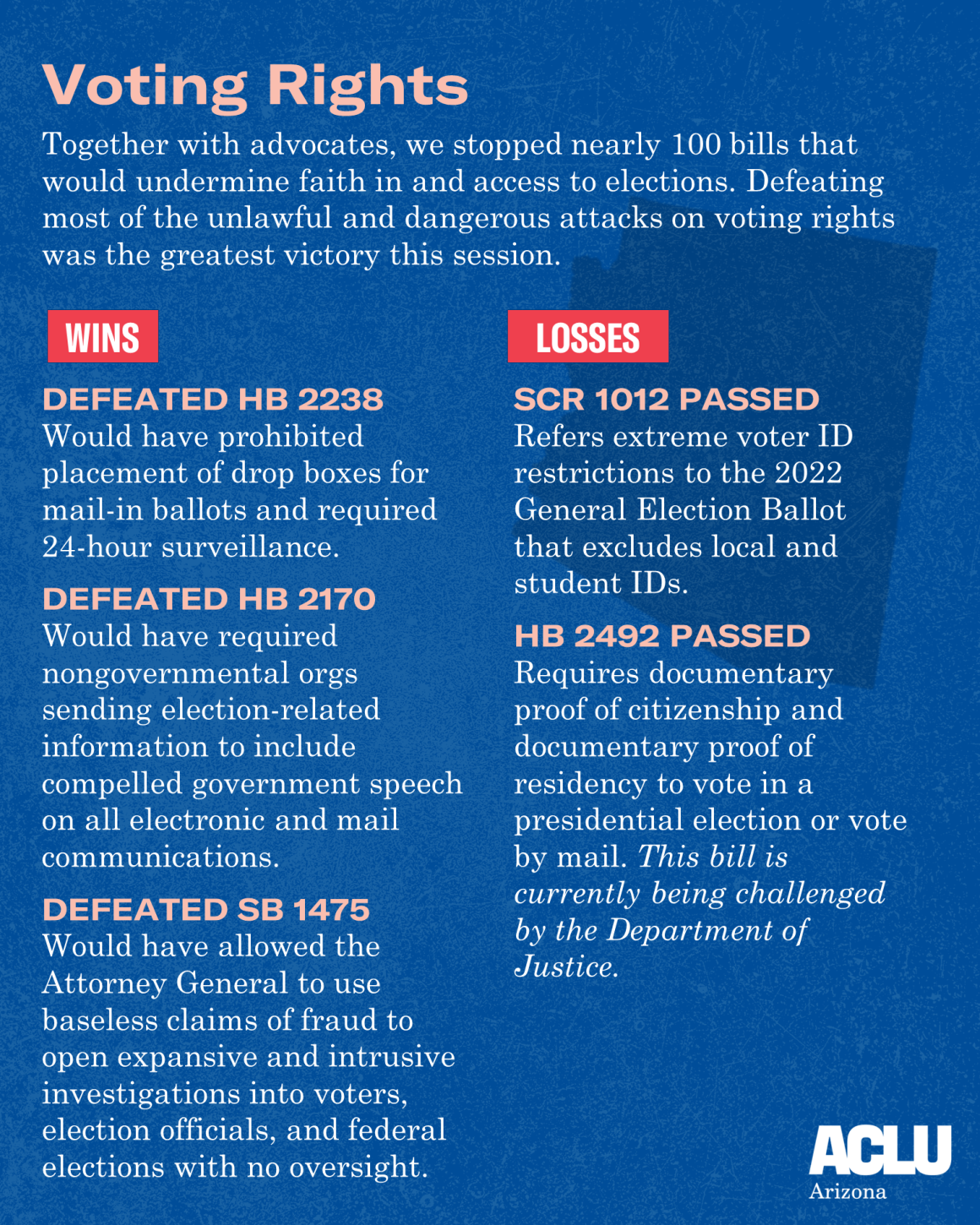 The ACLU fought and defeated several bills that would have fueled mass incarceration, continued the failed War on Drugs, and increased racial disparity in our criminal legal system. Chief among them was HB 2021, which would have allowed prosecutors to treat accidental overdoses as homicides. People with substance abuse disorder need our help and compassion – not prison. HB 2021 would have undercut recent reforms such as Arizona’s “Good Samaritan” Law which allows people to report an overdose without fear of criminal prosecution, thereby increasing the likelihood medical personnel can provide life-saving care.

Unfortunately, we did see the passage of new laws that will further criminalize Arizonans. HB 2696 expands the definition human smuggling in such an extreme manner that family members and people who provide humanitarian aid to undocumented people could be charged with a crime just for driving someone to the store, a hospital, or a shelter. 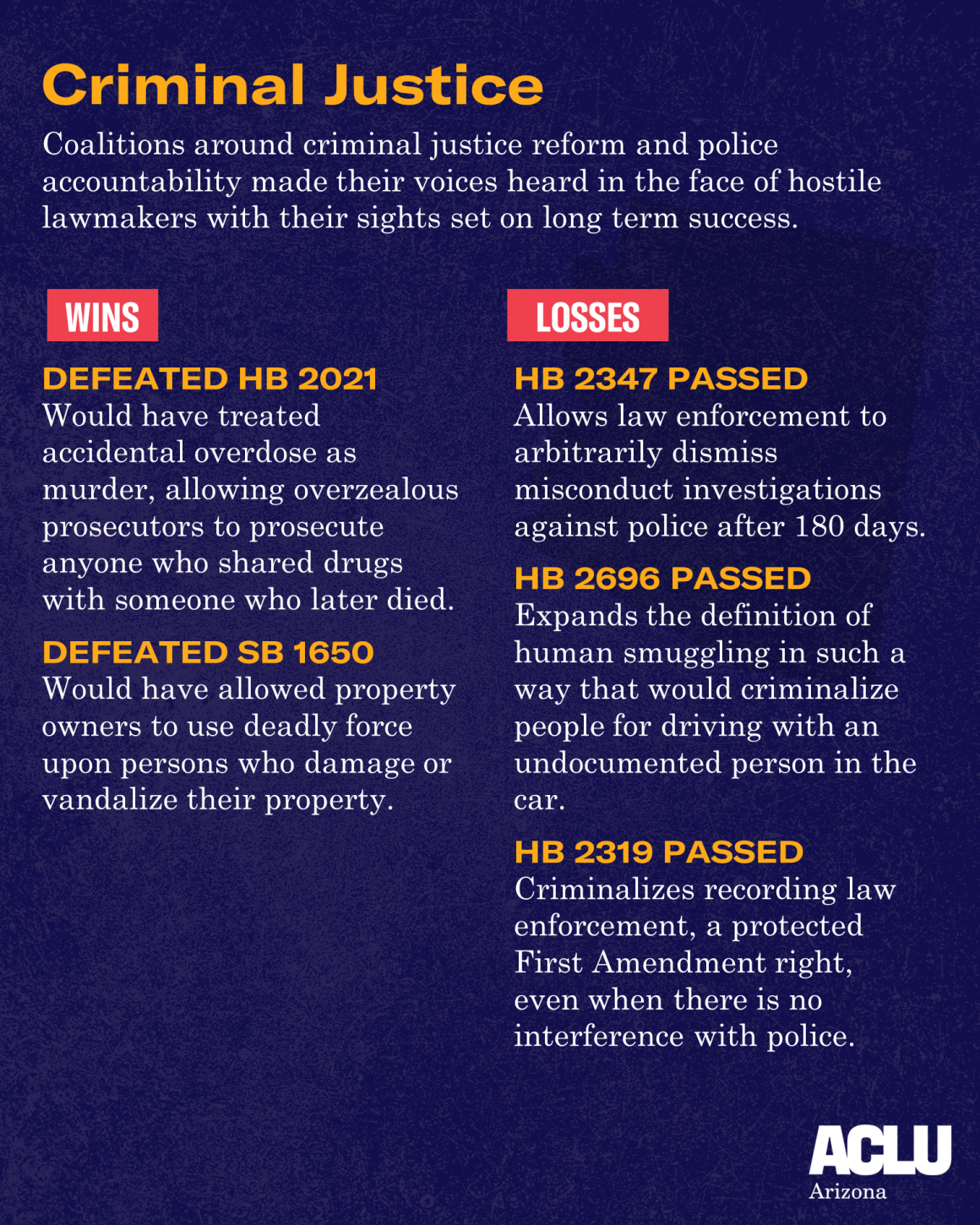 Standing with the LGBTQ+ Community

The Arizona Legislature introduced over 20 bills that sought to curb the rights of LGBTQ+ persons living in Arizona. With the help of partners, the ACLU was able to defeat many of these bills. Unfortunately, some attacks on the LGBTQ+ community did make it out of the legislature and were signed into law. SB 1165 prohibits trans girls from participating in sports that aligns with their gender identity from kindergarten through college. This bill needlessly harms trans girls’ mental health, physical well-being, and ability to access educational opportunities.

The unprecedented attacks on LGBTQ+ youth and families at the Arizona Legislature are a threat to the mental and physical well-being of LGBTQ+ Arizonans and the civil liberties of us all.  The ACLU will continue to remain vigilant in efforts to protect, uplift, and strengthen LGBTQ+ communities in Arizona. 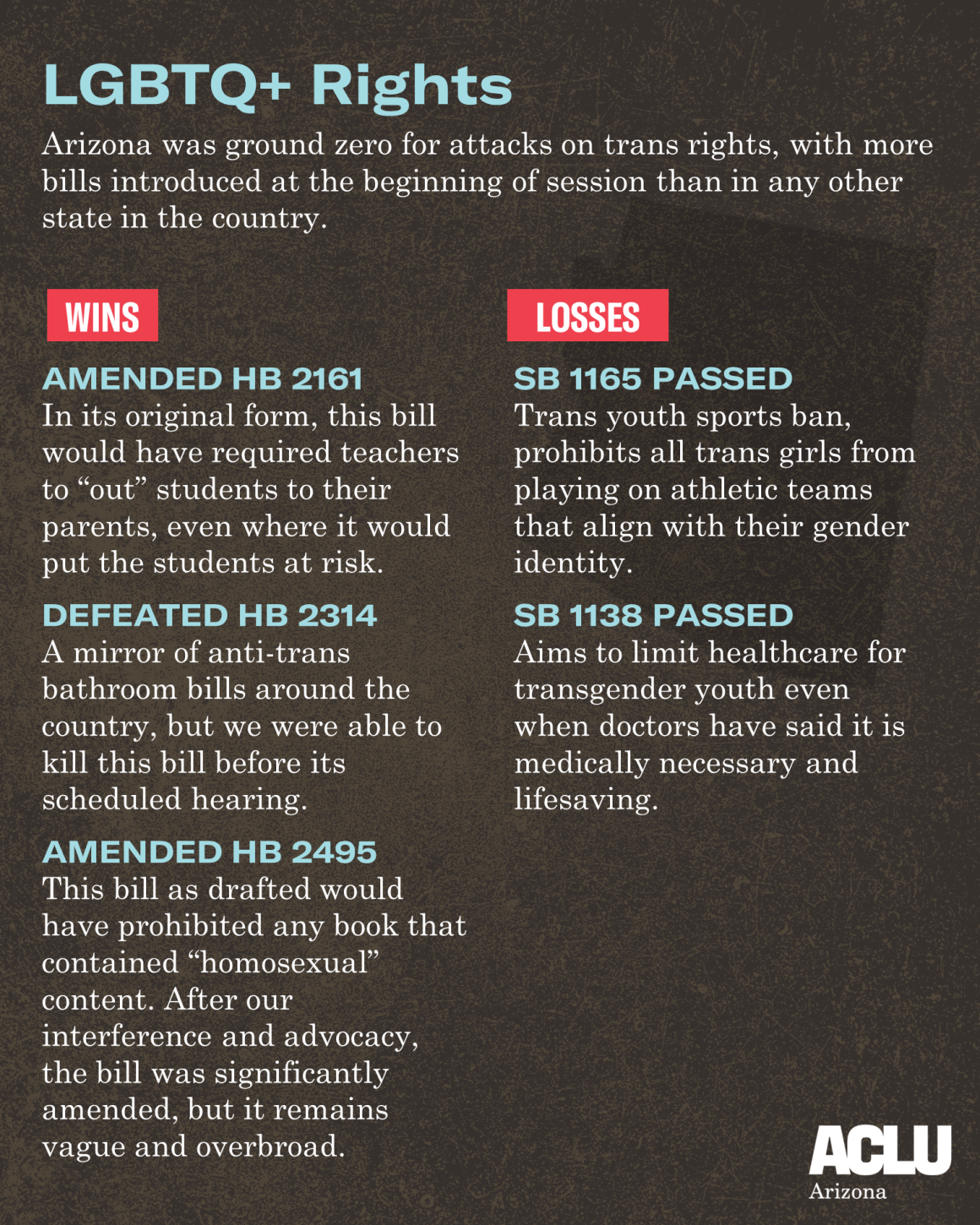 The fall of Roe has had devastating consequences across the country. In Arizona, a 15-week abortion ban, SB 1164, is set to take in effect in September of this year.  Banning abortion after 15 weeks denies a person the fundamental right to control their health care decisions. Learn more about where abortion rights in Arizona stands today.

The First Amendment protects the right to share ideas, including the right of listeners to receive information and knowledge. Unfortunately, politicians in Arizona continue to try to limit this right by attempting to pass classroom censorship bills, limitations on our ability to boycott, and encroachments on the separation of church and state. Anti-free speech lawmakers tried to ban students from learning and talking about race and gender in public schools, sponsoring multiple bills (SB1412, HR2112) that sought to prevent students from having an open and equitable dialogue about our country’s history — one that acknowledges the role of racism, sexism and discrimination in U.S. history and includes the experiences and viewpoints of people of color, LGBTQ+ persons, and other marginalized communities.

Finally, the State of Arizona allocated an additional $334 million in border enforcement and border wall construction. People who live along our southern border are already among the most over-policed in our nation. Adding hundreds of millions of dollars to fuel surveillance, military style equipment, and law enforcement will only deepen the humanitarian crisis at our border and increase the police presence in the lives of residents there. 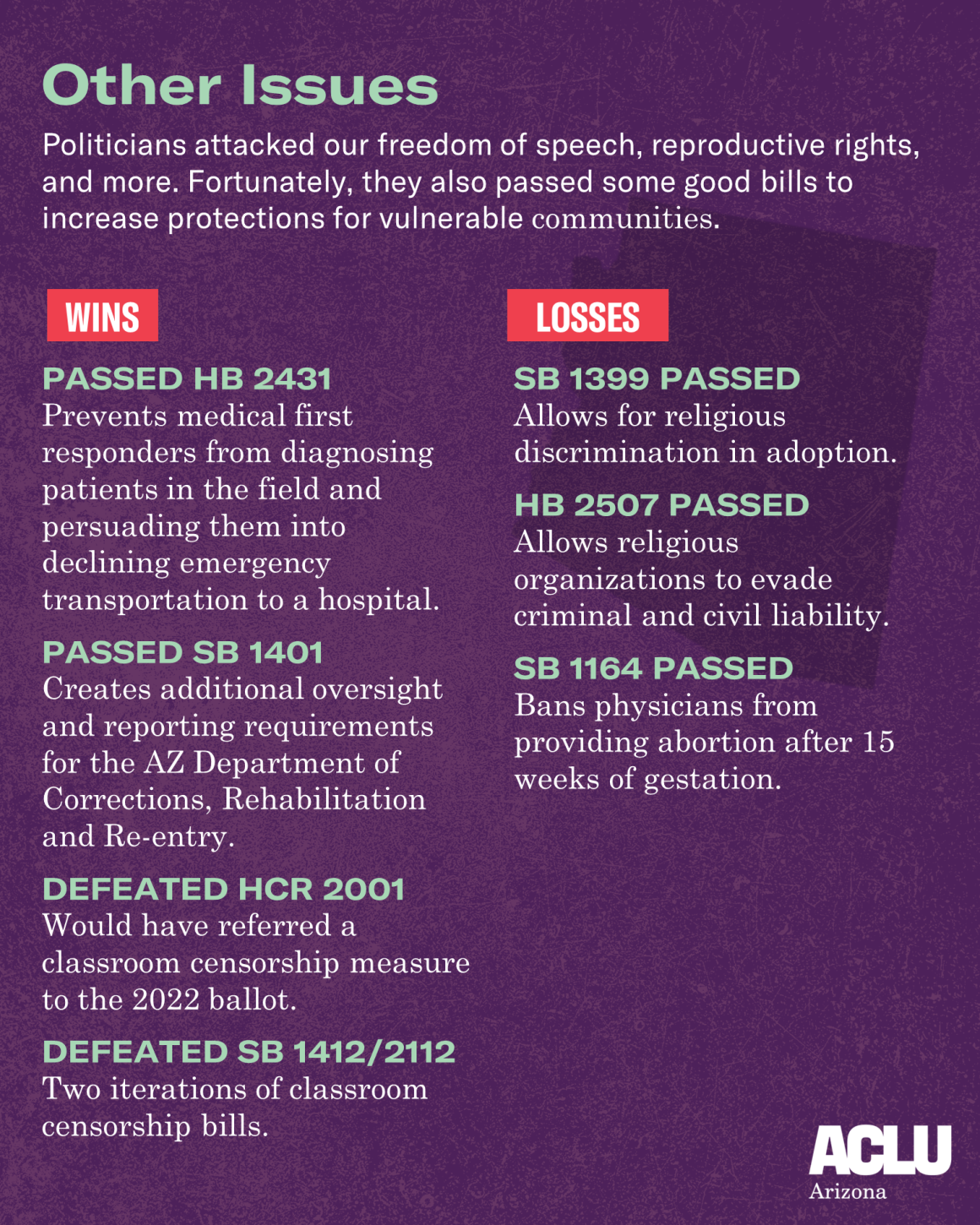 The 55th legislative session was among the most regressive in Arizona’s history. The challenges facing democracy, reproductive justice and civil rights are daunting, but together we can overcome them by working in a collaborative and focused manner that centers the experiences and perspectives of those most impacted. Thank you to our supporters, volunteers, coalition partners and colleagues for their continued support and collaboration. We can’t wait to tackle these challenges together next year!