A Letter from Perryville Prison 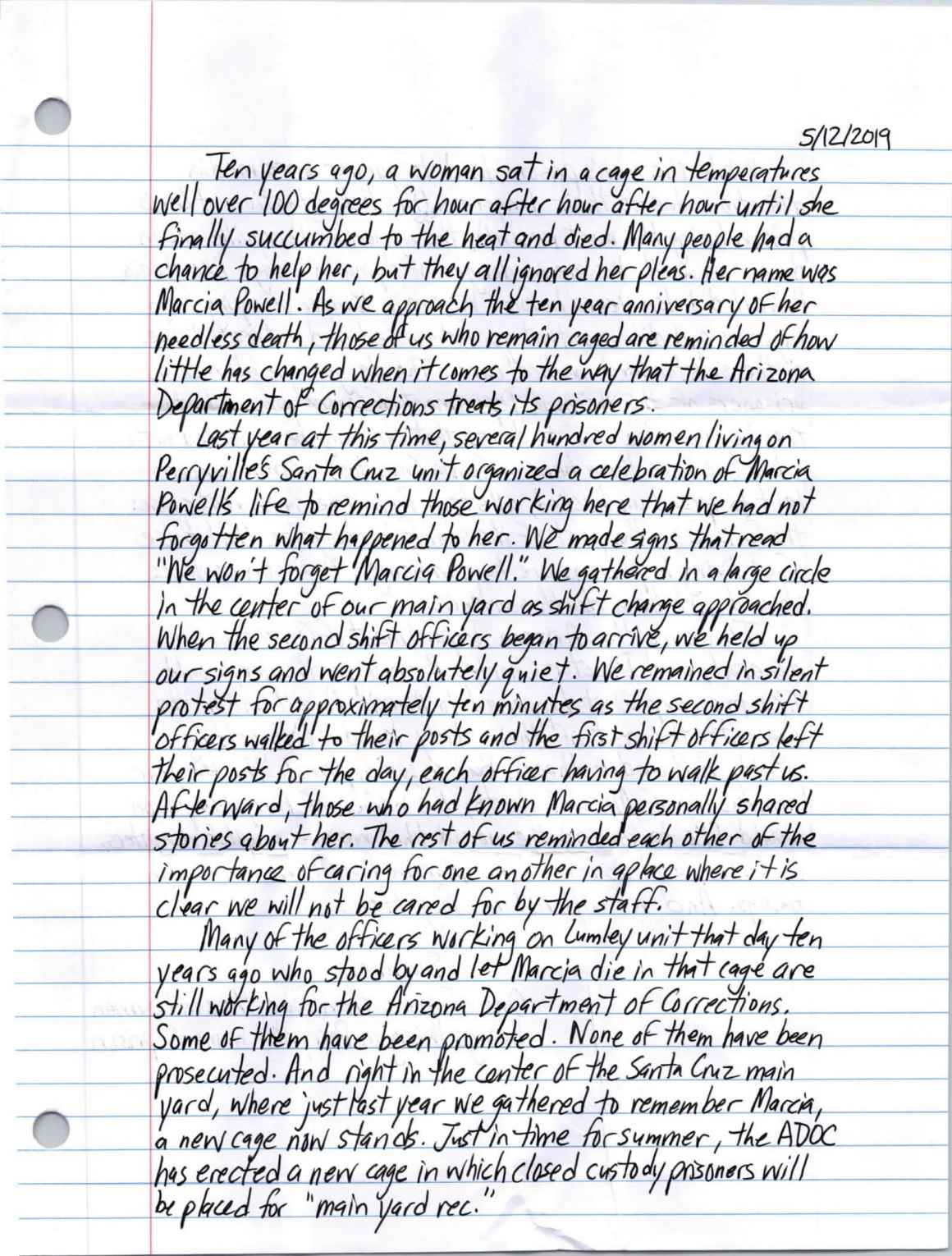 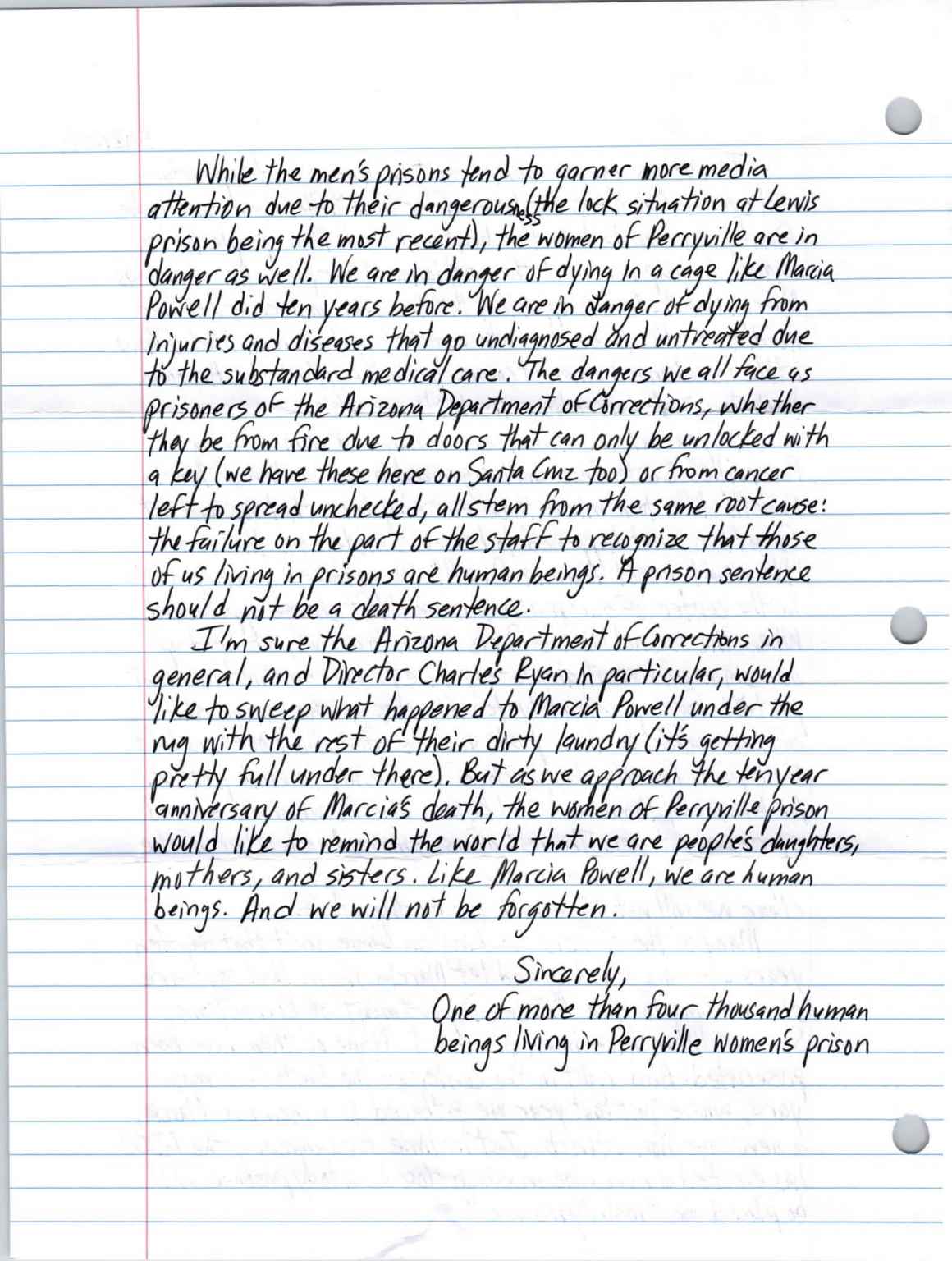 Ten years ago, a woman sat in a cage in temperatures well over 100 degrees for hour after hour after hour until she finally succumbed to the heat and died. Many people had a chance to help her, but they all ignored her pleas. Her name was Marcia Powell. As we approach the ten year anniversary of her needless death, those of us who remain caged are reminded of how little has changed when it comes to the way that the Arizona Department of Corrections treats its prisoners.

Last year at this time, several hundred women living on Perryville’s Santa Cruz unit organized a celebration of Marcia Powell’s life to remind those working here that we had not forgotten what happened to her. We made signs that read “We won’t forget Marcia Powell.” We gathered in a large circle in the center of our main yard as shift change approached. When the second shift officers began to arrive, we held up our signs and went absolutely quiet. We remained in silent protest for approximately ten minutes as the second shift officers walked to their posts and the first shift officers left their posts for the day, each officer having to walk past us. Afterward, those who had known Marcia personally shared stories about her. The rest of us reminded each other of the importance of caring for one another in a place where it is clear we will not be cared for by the staff.

Many of the officers working on Lumley unit that day ten years ago who stood by and let Marcia die in that cage are still working for the Arizona Department of Corrections. Some of them have been promoted. None of them have been prosecuted. And right in the center of the Santa Cruz main yard, where just last year we gathered to remember Marcia, a new cage now stands. Just in time for summer, the ADOC has erected a new cage in which closed custody prisoners will be placed for “main yard rec.”

While the men’s prisons tend to garner more media attention due to their dangerousness(the lock situation at Lewis prison being the most recent), the women of Perryville are in danger as well. We are in danger of dying in a cage like Marcia Powell did ten years before. We are in danger of dying from injuries and diseases that go undiagnosed and untreated due to the substandard medical care. The dangers we all face as prisoners of the Arizona Department of Corrections, whether they be from fire due to doors that can only be unlocked with a key (we have these here on Santa Cruz too) or from cancer left to spread unchecked, all stem from the same root cause: the failure on the part of the staff to recognize that those of us living in prisons are human beings. A prison sentence should not be a death sentence.

I’m sure the Arizona Department of Corrections in general, and Director Charles Ryan in particular, would like to sweep what happened to Marcia Powell under the rug with the rest of their dirty laundry (it’s getting pretty full under there). But as we approach the ten year anniversary of Marcia’s death, the women of Perryville prison would like to remind the world that we are people’s daughters, mothers, and sisters. Like Marcia Powell, we are human beings. And we will not be forgotten.