I took a field trip to the Arizona State Capitol. Now I’m fired up for reform! 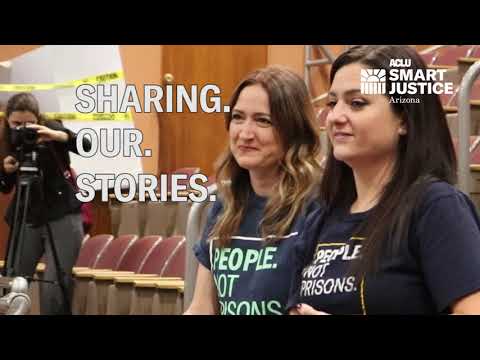 Last week, I took a field trip to the Arizona State Capitol with the ACLU of Arizona’s Campaign for Smart Justice. Standing in the halls of power was an informative and empowering experience and has me fired up to advocate for long-overdue criminal legal reform.

I was born and raised in Arizona and I am now raising a family of my own here, including my biological niece. Her father, my brother Jeffrey, lost his life in the most terrifying and painful way imaginable – due to a brutal attack in an Arizona prison just three months before he was to be released. The lack of protection and safety provided to my brother, along with the lack of immediate medical response and care, is part of a culture present in our current prison system. The Arizona Department of Corrections has a long history of being indifferent to basic human rights. I went on the field trip to the Capitol to learn more about how we can change that.

I have always had a desire to help and better the community in which I live. During the field trip, I learned firsthand how an idea becomes a bill and how a bill becomes a law. Arizona House Representative Athena Salman took us through an immersive experience, walking us through the House of Representatives and the Senate to see the desks at which decisions are made that directly affect our lives. It was incredibly empowering and unlike anything I could have learned in a classroom.

After the tour, Sen. Martin Quezada and Sen. Juan Mendez joined us for lunch. They, along with Rep. Salman, stressed the importance of people like us coming to the state Capitol to testify in front of our elected representatives and senators. The legislative session begins in January, and the ACLU of Arizona Campaign for Smart Justice will work with a bipartisan coalition to pass bills that will safely and effectively reduce our prison population and restore dignity and respect to people living in prisons.

Too often, criminal legal reform bills die or get voted down because many of our representatives, senators, and our governor listen to special interests, like the Arizona Department of Corrections, the private prison industry, or county attorneys who do not want to give up their power. Meanwhile, people like me who’ve been impacted by the criminal legal system have expertise that lobbyists and special interests just don’t have. Each of us has power within ourselves to stand up at the podium and shed light on the truth of our failing prison system.

My brother was aware of this failing system. While serving his time, he began thinking of how he could serve his community when he was released. Jeff wasn’t just my brother – he was a father, and a son and an uncle – he was loved deeply by his parents, siblings, nieces and nephews. But he was afraid of becoming a product of his environment. He wrote in a letter “It takes a community to restore order in times of crisis, and in order to bring light to this, we must be honest with ourselves and one another and work together to fix this epidemic.”  He was lamenting the fact that incarceration currently isn’t doing enough to foster rehabilitation and release. He was willing to do his part, but he was never given the opportunity to come home.

I plan to return to the state Capitol during the upcoming legislative session to make my voice heard and I'd love for more people directly impacted by the criminal legal system to join me. To get involved, contact Smart Justice organizers Khalil Rushdan at krushdan@acluaz.org or Kara Williams at kwilliams@acluaz.org. Together, we will create a better Arizona.