The Biden Administration is Out of Excuses. It’s Time to End Migrant Expulsions.

Over the past few weeks, we have witnessed horrific, anti-Black cruelty against Haitian migrants at the border. As shocking as they are, these images are part of a long history of racism and systemic dehumanization of migrants borne through abusive and exclusionary immigration laws and policies—policies like Title 42.

The ACLU is challenging this policy in court and through calls to action. Just this week, the ACLU of Arizona, along with various elected officials, organizations, and leaders from across the state sent a letter to Department of Homeland Security Secretary Alejandro Mayorkas asking for an immediate end to Title 42 expulsions. We all agree that we need to build an asylum system that is humane and fair, but we can’t do that until we restore asylum access. That starts with ending the Title 42 order.

Title 42 is not about the management of the virus— the glaring inconsistencies in how the government has approached COVID-19 management show that. There has been little transparency and consistency on behalf of the Biden administration regarding the distribution of COVID-19 vaccines for individuals in ICE custody. As ICE facilities in Arizona experienced some of the highest COVID-19 infection rates in the country, we urged for the immediate release of people that had a high risk for severe illness or death from COVID-19. Similarly, while Governor Ducey has expressed ardent support for Title 42, ostensibly out of concern over COVID-19 spread, he has refused to impose a variety of safety measures recommended by public health professionals, leading to criticism that his office mismanaged the spread of the virus in Arizona.

While restrictions were being lifted in Arizona, many individuals and families fleeing persecution have been blocked from entry and subject to summary expulsion. Many now are languishing on the Mexican side of the border awaiting the opportunity to pursue their legal right to asylum—while truck drivers moving cargo, people seeking to travel for work and study, and U.S. citizens and Legal Permanent Residents are allowed to travel back and forth across the border without restrictions.

Not only does Title 42 violate the rights of asylum seekers, it also perpetuates racist stereotypes—stereotypes that give way to false claims such as blaming migrants for an increase in COVID-19 cases. Even Dr. Fauci recently pushed back on that falsity. And as the images of Border Patrol’s Title 42 enforcement at the Southern border make international headlines, people are beginning to recognize how anti-Blackness permeates within the culture of the agency. In just over one week in September, approximately 4,000 Haitian migrants were quickly expelled from the U.S. pursuant to Title 42, to a home country the U.S. knows is in no position to receive them safely.

Seeking asylum is a legal right that the United States has an obligation to respect. Allowing for full and fair asylum hearings is a necessary part of that obligation. Instead of focusing resources on protecting asylum seekers and providing a dignified and humane process, DHS, Governor Ducey, and even the Biden administration perpetuate a narrative about a “crisis at the border” that has been largely created through the U.S. immigration policy including Title 42.

The case against the Title 42 order is clear. It is not in place to prevent the spread of COVID-19. The order violates domestic and international law, goes against the recommendations of public health experts, is discriminatory, and contrary to basic principles of human decency. The Biden administration must end the Title 42 order now.

Join us in action and call on President Biden and Department of Homeland Security Secretary Alejandro Mayorkas to restore people’s ability to seek protection from persecution in the United States, as U.S. and international law require. Take action now. 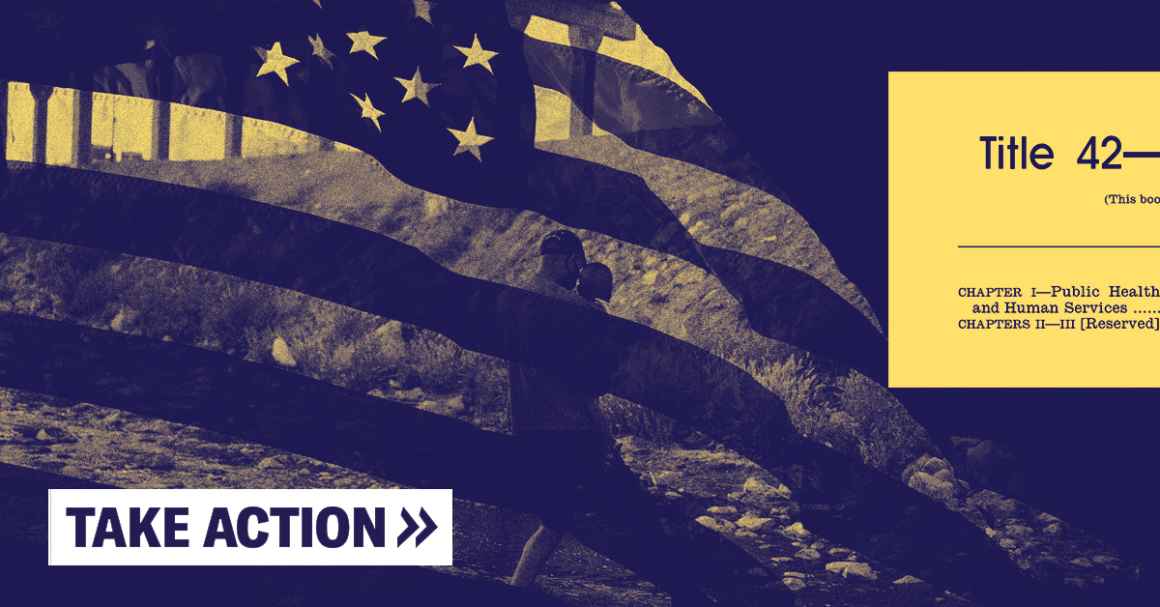