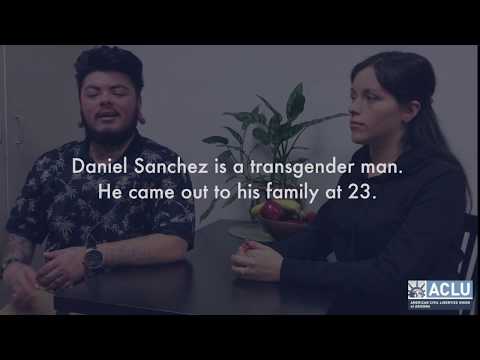 Growing up, Daniel always felt like his external appearance did not reflect how he felt on the inside. At 23 years old, with the support of his biggest cheerleader, his sister Tanya Sanchez, Daniel took the courageous step and shared with his family and friends that he was transgender, and wanted to begin the transition to male.

However, Daniel never imagined being discriminated against because of his gender identity. It was not until he was denied a service at a bank that he experienced what discrimination felt like, and it was hurtful. One afternoon, Daniel arrived at a Chase bank needing to make a deposit. The meeting with the clerk started out pleasant, Daniel said, but the conversation soon turned icy when the clerk asked for identification. No longer jovial, the clerk refused to deposit the check and sent Daniel away.

Daniel had all the paperwork needed to make a deposit and had even called the bank earlier that day to explain his situation. None of that mattered – Daniel was denied service and experienced a hurtful act of discrimination, only for being himself.

Daniel can’t understand why people treat him differently when we are all human. Although this act of discrimination hurt him, Daniel believes that everyone has the right to pursue happiness, and that is what he intends to do. He has his sisters support, is engaged and happy.