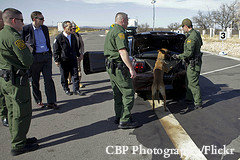 By definition, Border Patrol checkpoints involve the “seizure” of innocent motorists without any suspicion of wrongdoing. It is impossible to reconcile these dragnet stops with the Fourth Amendment’s prohibition on unreasonable searches and seizures.

Additionally, Border Patrol agents regularly ignore the limitations on their authority at checkpoints, resulting in a range of civil rights violations including unlawful searches, prolonged detention, racial profiling and excessive use of force. Given the persistent lack of agency oversight, many of these abuses are never reported or addressed.

The ACLU is investigating and documenting checkpoint abuses, and fighting to hold Border Patrol accountable.  We hope the following information will assist others to do the same.

ACLU Know Your Rights With the Border Patrol (English)

ACLU Know Your Rights With the Border Patrol (Español)

On January 15, 2014, the ACLU sent a complaint to DHS oversight agencies regarding widespread abuses at Border Patrol interior checkpoints in Arizona.

On April 28, 2014, the ACLU filed a lawsuit under the Freedom of Information Act (FOIA) to obtain records related to Border Patrol interior checkpoints in Arizona.

Visit the ACLU National site for additional resources and information on your rights in the U.S.-Mexico border zone:

Many news outlets have covered community opposition to a checkpoint outside Arivaca, Arizona: