ACLU of Arizona Statement on Termination of DACA

PHOENIX—The Trump administration today announced the termination of the Deferred Action for Childhood Arrivals (DACA) Program. The DACA program has served as a critical lifeline for nearly 800,000 young immigrants, or "Dreamers," who use their DACA status to give back to the U.S. and Arizona in innumerable ways, and call this country and our communities their home.

Alessandra Soler, executive director of the American Civil Liberties Union of Arizona, made the following statement in reaction to the White House announcement rescinding the DACA program:

“The Trump administration has once again devastated Arizona with its cruel agenda. While Joe Arpaio, a racist convicted of disobeying court orders, enjoys his presidential pardon, 25,000 hard-working, young immigrants in Arizona have been tossed into legal limbo. With today’s announcement, President Trump has injected chaos and uncertainty into the lives of 800,000 Dreamers, thousands of workplaces, and communities across America.

"The end of DACA creates a new urgency to pass a clean, standalone, and bipartisan Dream Act that addresses Dreamers’ renewed vulnerability to deportation. Members of Arizona’s congressional delegation must decide if they are on the side of Dreamers and our country’s best traditions or on the side of the ugly forces that helped to end DACA. We will continue to fight for the lives of Dreamers who came to this country as children and know the United States as their only home.” 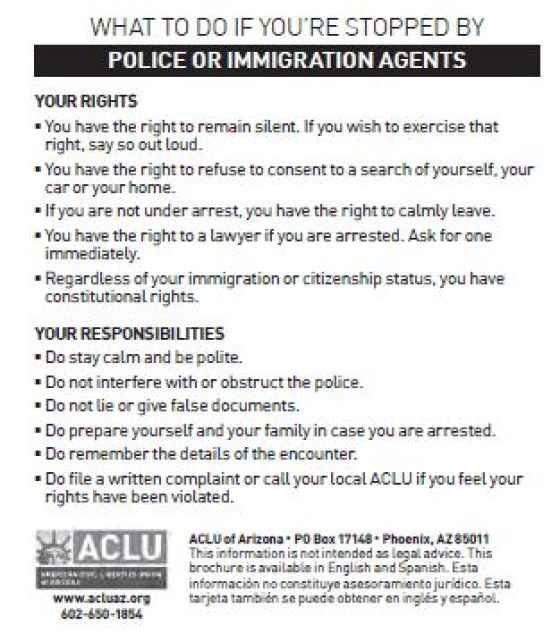 Know Your Rights with Police or Immigration Agents

160+ Organizations Call for an End to Mistreatment of Religious...