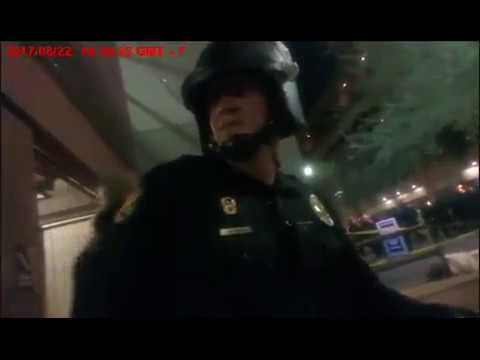 **update (10/4/19): District Judge John J. Tuchi issued an order certifying two separate classes in Puente v. Phoenix. The group of plaintiffs in the lawsuit, including two community organizations and four individuals who were silenced, tear-gassed, and pepper-sprayed during the August 2017 protest in downtown Phoenix, has now been expanded to include possibly thousands of other individuals whose voices were violently suppressed by the illegal use of force by the Phoenix police. Click here for more information.

The ACLU of Arizona is interested in hearing from people who believe their civil liberties were violated on the night of August 22, 2017: https://action.aclu.org/secure/az-complaint-form?ms=web_160324_aff_AZ_

After uncovering a video clip showing a Phoenix police officer calling a pepper ball gun a “toy” and predicting the use of chemical agents on protesters, the ACLU of Arizona is asking for the public to help review hours of videos of the August 22, 2017, protest that took place while President Trump was speaking in Phoenix.

The protest ended abruptly when Phoenix police officers began using excessive force against the crowds. Many Arizonans went home from the protest with cuts, bruises, and other injuries because of police actions.

We invite the public to give the ACLU of Arizona feedback on what they see in the videos, including evidence of potential police misconduct. Feedback can be submitted here: https://action.aclu.org/secure/FeedbackPhoenixPDVideos

More information about the Phoenix protest of President Trump on August 22, 2017, is available here:

The ACLU of Arizona is also continuing to collect personal videos and photos of possible police misconduct at the August 22, 2017, protest in Phoenix. These photos and videos can be submitted via Dropbox: http://bit.ly/2v6RtDV.

Questions can be directed to communications@acluaz.org.

ACLU of Arizona Sues Phoenix Police Department for Failure to...