This November, Protect the Right to Vote 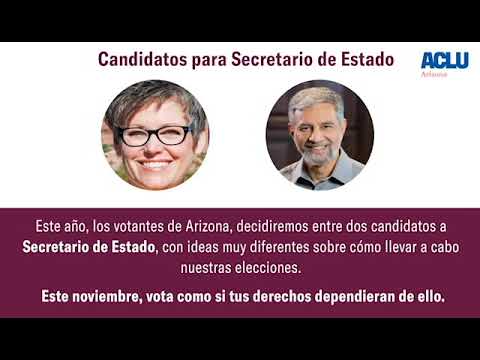 This year, Arizonans will decide between two candidates for Secretary of State with very different views on how to run our elections.

While the ACLU does not endorse or oppose candidates for office, we want voters to know about the key civil liberties that are at stake in this election. As the top elections official in the state, the Secretary of State can craft policy that will impact how voters exercise their rights at the polls.

The Voting Rights Act protects all eligible voters, no matter what language they speak. In Arizona, the counties of Maricopa, Pima, Santa Cruz, and Yuma are required to distribute voter registration information in Spanish. Gaynor wants to see that law changed, making ballots only available in English, which could lead to major voter suppression. An estimated 1 million Arizonans could be left out of the voting process if ballots were produced only in English.

We cannot let this happen. That’s why this week the ACLU invested $100,000 into running Spanish-language radio ads on stations across the state to educate voters about the harm Gaynor’s views pose to our voting rights. These ads will run through the election. We’re also planning similar ads that will run online.

Arizona already places unnecessary hurdles in front of eligible citizens before they can even cast a ballot. Earlier this year, the ACLU of Arizona filed a lawsuit against current Arizona Secretary of State Michele Reagan for failing to update voter registration records in compliance with the National Voter Registration Act (NVRA). As a result of Reagan’s failure, approximately 384,000 individuals did not have their voter registration addresses updated and may not be able to vote in the November 2018 election.

Our Secretary of State should make it easier to vote, not harder.

Katie Hobbs, Gaynor’s opponent, has pledged to defend the law and protect our right to vote. Hobbs has stated that she wants to be a champion for voters and recognizes that not all eligible voters are able to participate in the process. Hobbs acknowledges that barriers to voting disproportionately affect minorities, people in rural communities and people without fixed addresses.

Arizonans deserve a Secretary of State who will protect our democracy. Gaynor has told Arizona he will not do that. He opposes early voting, accessible voter registration and the law that requires ballots in some parts of the state to be printed in multiple languages.

Early voting has begun. Mail in your ballot today or vote in person on November 6. Find more information here: https://azsos.gov/elections/voting-election.

Why we support the Arizona Fair Elections Act – and why you should...

The Arizona Senate and it's Sham Audit

What To Do If You Are Challenged On Voting Day

Your Rights As An Arizona Voter

Voting by Mail Will Protect Our Health – and Right to Vote