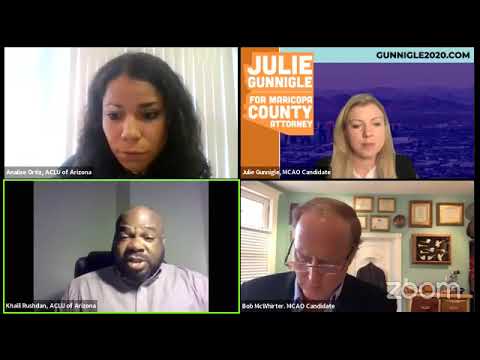 The Maricopa County Attorney is the most powerful person in Arizona’s criminal legal system. This elected position sets the policies and procedures that all prosecutors in its office must follow. They decide who goes to prison and for how long.

Since Maricopa County Attorney Allister Adel was appointed to her position, the ACLU of Arizona has been trying to sit down with her and work toward criminal legal reform as a community. However, Adel snubbed those efforts after meeting with us once and then never following up.

Now, the world is dealing with a pandemic and across this nation we are seeing the infection rates in some of the prison systems dramatically increase. County Attorneys have tremendous amounts of power, therefore, the ACLU of Arizona is asking Maricopa County Attorney Allister Adel to have a proactive pandemic plan and push for the broad releases of elderly folks in jail, people with underlying health conditions, and people who do not pose a risk to public safety.
We wanted to discuss our proposals with Adel during the candidate townhall on April 30. Unfortunately, she declined to attend.

I want to thank the other candidates running for county attorney Julie Gunnigle, Bob McWhirter, and Will Knight for attending and addressing people's concerns about the real threat of COVID-19 devastating the incarcerated population.

When asked to present their “pandemic blueprint”, a plan for how to address COVID-19, Will Knight and Julie Gunnigle both presented clear plans that included commitments like putting health experts in charge, suspending revocations for technical violations for probation and community supervision, reducing the number of people going into jails and prisons and reducing the at-risk population already in custody.

Bob McWhirter, Julie Gunnigle, and Will Knight all stated publicly that procedures which have been reduced or suspended during the pandemic should never be used at all, like cash bail, holding people on technical probation violations, and unnecessary arrests for low-level drug possession cases that require treatment, not incarceration.

All three candidates agreed that increased use of police enforcement to handle violations of social distancing is not appropriate, especially when it becomes yet another tool leading to the targeting and criminalization of communities of color.

It is crucially important to know where all Maricopa County Attorney candidates stand on criminal legal reform before casting a ballot in the August 4 primary and the November 3 general election.

I hope their definition of justice would match mine. My definition of justice comes from someone who is directly impacted by a wrongful conviction. I was prosecuted by a very vindictive prosecutor. I was fortunate to have support and get my case overturned due to prosecutorial misconduct and vindictive prosecution. After serving 15.5 years in this same system, I decided to get back on the frontline and be a voice for people currently incarcerated.

It is my wishes that all candidates running for Maricopa County Attorney, and all members of the community, will take an oath moving forward to change what “justice” means. Let’s change the narrative of justice to mean something positive, something that brings people together instead of tearing them apart.